Disclosure: I received this complimentary product through the Homeschool Review Crew.

Pursued to Eternity by John Riley sounded like quite an interesting book when I read the description. It sounded like quite a few topics pulled together into an adventure, so I signed up to receive a copy of the book. I thought I might read it aloud to my family, but when the book arrived (yes, he sent a physical copy to us here in New Zealand!), I saw that it would not work well as a read-aloud for us. 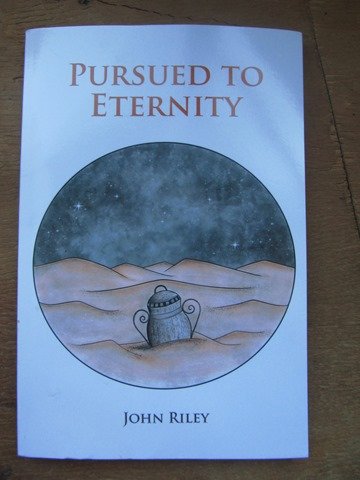 Several stories are put together into one story here. The first chapter is the author’s musings about God and time. He narrates the book through the eyes of a fictitious man, whose brother was an atheist. After that first chapter of introductory material about God’s work with mankind at various times throughout history, he tells a story about hunting dinosaurs in what is now Kenya, and then relates the story of the Exodus from the point of view of an Egyptian girl who kept a diary. After that, he switches to the present.

Alan and Conner Bridges joined their entire family for Thanksgiving Dinner. After dinner, the brothers had a discussion about God and why Conner believed in God and the Bible. Conner presented many good reasons for the truth of the Bible to his atheist brother. Later in the day, Alan announced that he was going to Kenya to explore for oil.

Conner was a high school biology teacher. He was required to teach evolution, and forbidden to mention Creation—but he found ways, even so, to plant doubts in his students’ minds. Soon, his students were building a website with questions that pointed out weak spots in the evolutionary theory. Eighteen pages of the book are devoted to those questions! Of course, the school board could not handle this questioning, and Conner was forced to resign. Meanwhile, Alan was finding some very interesting things in Kenya—what did those findings mean for his soul, and for Conner’s students’ questions?

I found this book a bit disjointed. Almost too many topics are presented to be a cohesive story. The author does pull things together somewhat at the end, but the continuity of the story is broken up by many lists of facts. Also, I found even the adventure parts of the story to be somewhat dry, told in a passive tone of voice. I do like the drawings that are at the beginning of each chapter! The book itself is an ordinary softcover, a very nice size to hold while reading.

John Riley has put together a Creation Apologetics course that is on SchoolhouseTeachers.com. It looks quite interesting. It consists of video lessons with worksheets. I just watched parts of one of the lessons, and he has a variety of speakers, in many different settings. This course looks like it would be very encouraging, and would strengthen teenager’s faith in the truth of the Bible.

Upper teens who are interesting in the Creation/evolution debate would likely find Pursued to Eternity interesting. To see what other families thought about this book, click on the image below. I plan to check out some of the other reviews, because I’m quite curious what other people thought of this book.