I have been trying to teach my boys touch typing for a long time now. Esther learned when we still lived in America, using an old typing book I had picked up somewhere. It was very similar to the way I had learned, and really worked. The boys have been using a variety of computer programs, and none of them was working as well as I thought they should. I had been thinking about finding something else, so when The Typing Coach Online Typing Course, from The Typing Coach, was offered for review, I jumped at the chance. Mr. Intellectual has been using it for five or six weeks now, and he is really happy that he got to.

This program is quite different from the other online typing programs I’ve seen. It took awhile for Mr. Intellectual to get started with it, because there is a lot of introductory material to get through. To start out, you read a brief introduction, then watch a video introducing the method used in The Typing Coach. After that, you are asked to print several documents, which contain the passages you’ll be typing for practice, and then watch another, much longer video explaining how the course works. It took my boy several days to get through all that! The last step before actually learning to type is to do the Before and After Snapshot—type the Gettysburg Address for three minutes and take a screenshot of your results.

Finally, you’re ready to start the first lesson. That covers good posture while typing (mine isn’t very good all the time, to be honest). The second lesson covers the home row. It begins with an audio in which the instructor tells you where to have each finger and what letters to type. Then, you practice, using the student packet you printed out earlier, until you can get through several lines without a mistake. When you feel ready, take a test. You will not pass the test until you have 100% accuracy! The big difference I’m seeing between The Typing Coach and the other programs we’ve tried is that you are not to look at the screen. You are to keep your eyes on the paper you’re copying from. While you listen to the audio, of course, you won’t see anything on the screen, either. You are to type in a word processing program, such as Microsoft Word or Google Docs. That makes it work much like real life.

Does it work? Yes, at least for Mr. Intellectual! He already knew how to touch type, but was very slow and not accurate. He had been averaging 6-10 words per minute, with several errors. Today, when he did the Top Row Learning Check in The Typing  Coach, he typed 11 words in 40 seconds, with no errors. He’s pretty happy to be able to type faster. In fact, when he writes stories, he is now typing them rather than using a speech-to-text program! I will probably be using this program for some of my other children in the future (you don’t want to use it with children much younger than about sixth grade, unless you have time to help them through it). One thing I really appreciated is that Mr. Intellectual was able to do this program pretty much on his own.

We did have some frustrations with this course. At first, the website seemed pretty clunky and hard to navigate. After playing around with it and looking closer at everything, we found what we needed, though. We did notice that things were changed as we used it, and it’s actually much better than it was before. Another frustration was that you have to wait two days, to the minute, before retaking a test that you have failed. That is especially aggravating when you’ve left Caps Lock on accidentally! We did find a way around that, though; if you enter a different name you can retake it immediately, so my boy used his middle name a couple of times. However—remember that the purpose of this course is to teach mastery and accuracy! That is why the rule about not doing the test again immediately. You are to practice and practice until you are absolutely accurate. 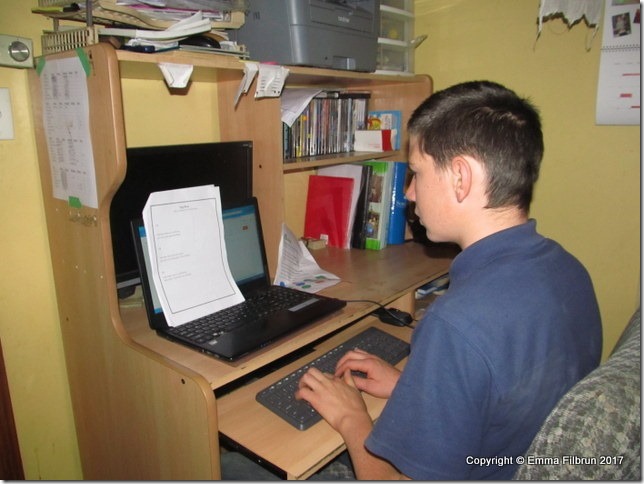 The suggested pace is a lesson a week for ten weeks. Mr. Intellectual hasn’t quite held to that pace, because life is pretty crazy around here; he’s finishing lesson 3 right now. We’ve had a lot of days we had to take off school to go to Christchurch for appointments, or other life happenings, including our upcoming trip to America. He has learned a lot, though, and plans to finish the course after we get home. I highly recommend this course for anyone who wants to improve their typing speed or accuracy, but you will have to have the patience to figure out the course.

To read what 100 reviewers think about The Typing Coach, click here: