One of the products we have been able to try out lately in order to review for The Homeschool Review Crew is Creative Freewriting Adventure, from the Home School Adventure Co. I requested this item for review because we often have a hard time coming up with ideas for writing stories for our homeschool writing group, Dead Boring. I thought maybe this book would help with that. Well, it has—but not for everyone, as I was hoping. It was a bit too involved for most of the children, but Mr. Intellectual is doing very well with it.

There are ten exercises in the book. Each one gives you a story to set the stage, and then suggests several things to incorporate into your story. After studying these two or three pages, you are to set a timer and write for 15 minutes. Use your imagination and come up with a continuation of the story you were given in the beginning, putting yourself into the scene! After reading the first assignment, I was inspired to write a story, and it was quite fun. I don’t normally do fiction at all; I’ve never been able to come up with much of anything. This was different, though. It was very easy. I’ve been wanting to do another of the exercises, but haven’t had time. Maybe someday soon. I typed my story into the computer, rather than handwrote it. Here is my story: 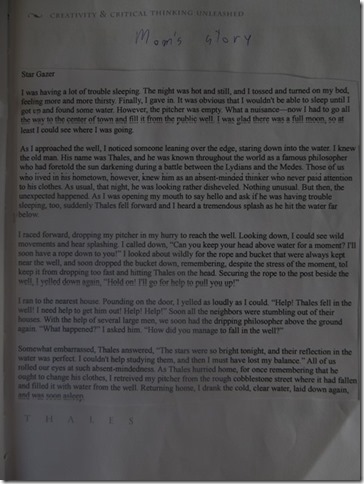 Mr. Intellectual has now completed four of the exercises. He is spending a lot more than 15 minutes per story. Each day he works on it for 15-30 minutes. He started out typing, but his speed is still pretty poor, so I had him dictate into the computer. Esther found a program, some extension of Google Chrome, which converts speech to text, so he’s using a microphone and “writing” that way, then correcting what comes up on the screen. He still has so much to write for each story that it takes him several days to write each one! Here is one of his stories: 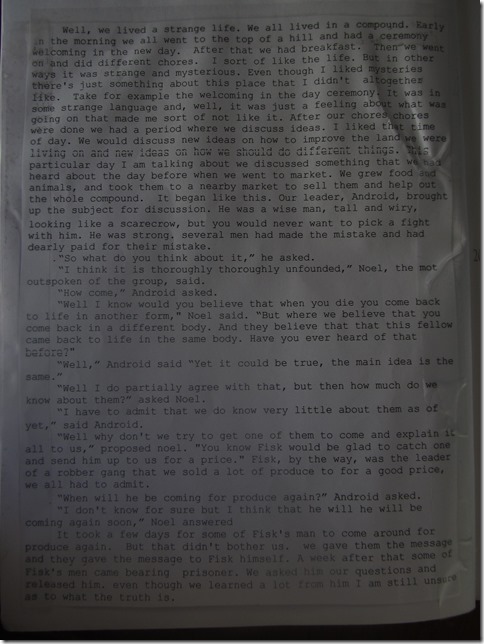 And, what are these assignments like? The first four feature famous Greek philosophers. A little of their life is described, and then you are assigned a scene to put yourself into. Several questions help you think about what might happen next, and you are asked to think about your senses. What do you see, hear, feel, smell? The next four follow the same format, but have to do with the book The Wise Woman, by George Macdonald. The last two have to do with eternity and Jesus’ birthday. It will sure be interesting to see what Mr. Intellectual comes up with for some of these exercises!

I’m glad I chose to use Creative Freewriting Adventures. Stacy Farrell has done a superb job of making writing fun. I don’t know if I’ll ever use this product again (it is a digital download, so I will have it available as long as it is in my harddrive), but it is certainly worthwhile for my budding writer.