This is a post I never imagined having to write. We have just experienced the hardest week and a half of our lives, after finding our oldest son dead last week. He had taken his life. Seth, known on this blog as Mr. Handyman, is sorely missed; he leaves a giant-sized hole in our family.

This is the last picture we have of Seth; a very typical sight. I spent more time teaching him, over the years, than any of the others. 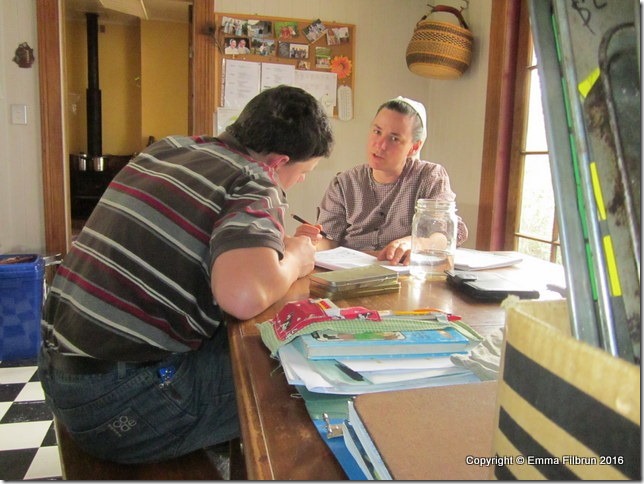 Here is the obituary/eulogy I wrote to be read at the funeral:

Seth’s life, while only a short 16 years, was very eventful. He was born a month early, with complications during birth that should have taken his life then, except that God chose to perform a miracle and save his life at that time. We have seen God’s hand on his life ever since, as he had accident after accident that could have been quite serious, even fatal, yet he was never hurt seriously. Seth loved playing with his older sister and his younger brothers. Even though he was the oldest boy, he never led out very much when he was younger; he preferred to follow Simon’s lead until the past few years. Seth always loved working hard. The last two years we lived in Michigan, we built two barns on our property, and he loved being involved as much as an 8- or 9-year-old can be. He also learned how to mow lawn about that time, which he loved doing the rest of his life. We raised and butchered chickens and turkeys there, and raised produce to sell, and he was a great help with that work, although not always willingly—he was a typical child.

After we moved to New Zealand, Seth discovered the joys of working for people outside the family. He was thrilled the few times he was allowed to drive tractor for our landlord, and badly wanted to do that more. He helped farmers tail lambs a few times, and thoroughly enjoyed that, as well. Another job he did for awhile was to build houses with a local builder. Because he was still in school, he could only work part of the day, and it got too hard to keep up school and the job, so the job had to go by the wayside for awhile. There were several days, though, that he was was so keen to work that he rode his bicycle to Gore Bay, an entire hour’s drive, after he finished his schoolwork for the day, then worked all afternoon.

Schoolwork was never easy for Seth. Besides severe dyslexia, there was some brain damage from the difficult birth which affected his entire life. Despite working extremely hard for 10 years, he could still read only haltingly—but he was always ready and willing to read a verse or two at Bible Study or during our Family Worship time. He never seemed embarrassed by his struggle to read, but plowed his way through. Funnily, he was a fairly good speller, despite his reading problem. And, no matter how hard it was for him to read other books, he was able to read the Bible better than anything else. He loved stories, and spent hours listening to audio books. Some of his all-time favorites, which he listened to over and over, were The Heavenly Man, The Hiding Place, and God’s Smuggler.

Seth loved little children. He was thrilled when Martha entered our family, a girl after six boys in a row. He loved to get her dressed, and usually picked out her frilliest, girliest dresses. He loved to carry her around Cheviot and show her off. A number of times, he took her to visit older people in the community whom he loved. In return, she adored him; he was her favorite brother. He loved other people’s little children, too. The younger children in the two churches which we attend regularly seemed to love him, as well as his little cousins when he made a visit to America last year. He still often talked about reading stories to them.

Seth will be greatly missed; there is a huge hole in our family now. We have to trust that the God who brought Seth safely into the world earlier than we thought he should arrive is the God who has now taken him back sooner than we wanted. We know for a fact that God loves Seth even more than we do, and that whatever God does is good, and we are very thankful that Seth gave his heart to the Lord about a year and a half ago.

We will always especially remember two funny stories about Seth when he was younger. When he was about five years old, he badly wanted to wear his Daddy’s tool belt but he was still too small. One evening, he piled his plate high with lettuce salad, then asked, very hopefully, “Mommy, will this make me fat?” Several years later, one evening, we were taking care of our chickens out in the paddock, in Michigan. Seth stood over an electric wire that his cousin, John, used to take electricity out to his cows. The wire had been turned off, and Seth was bouncing it back and forth between his knees. Someone asked, “What if John turns that wire—” and just then John turned the wire on! Seth leaped clear of the wire. These stories always make us laugh.

I hope that sometime in the next month or two I’ll be able to get back to posting, but I’m not going to hurry back to it. Life has been turned upside-down, and we’re reeling.

← Trip to Dunedin, Part 5—The Miscellaneous Pictures
Raising Your Family for Jesus Conference →