I am loving the fact that my favorite author is a prolific writer. Her fourth book for the year is publishing this week! Because this is the fourth book in a series, I “had” to read the first three, of course, so I’ve had a fairly steady diet of Chautona Havig lately. I’m not tired of them yet!

You can preorder the Kindle version of Front Window right now; it will be delivered on September 29. If you do preorder, be sure to ask Chautona for the bonus story. I can’t wait to read that—it’s going to be fun! I may have to reread the book, though, since the bonus gives more information to help solve the mystery. Go here to find out how to get the bonus. 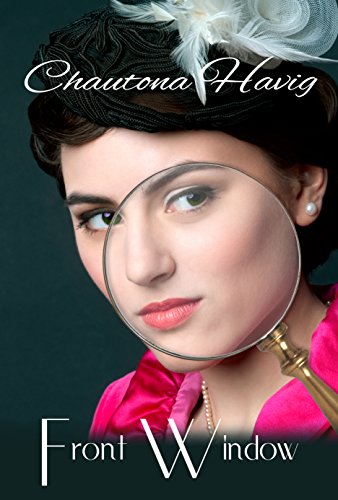 I really enjoyed Front Window. It was really hard to put it down—sometimes it’s pretty frustrating to only be able to read for a couple of minutes at a time, although it’s good discipline.

There have been a lot of changes in Alexa’s life. She has switched houses again, and her relationship with Joe is better than ever. She is also enjoying having Aunt Faye in Fairbury. However, Aunt Faye has found the perfect way to disturb a honeymoon. When things start disappearing from the retirement apartments Aunt Faye is living in, and the police don’t seem alarmed or helpful, how can Aunt Faye prove that one of the residents isn’t stealing the items? Things go from bad to worse over the next few weeks. Aunt Faye just isn’t impressed the how the police are investigating the string of crimes, and she lets Joe and the rest of the force know in no uncertain terms.

This is definitely not just a mystery story. There is so much else included! Ask my children about the time Mom was laughing out loud in the bathroom—the Christmas gift scene is hilarious! There are several other very funny scenes as well, and some serious ones. Aunt Faye, though never married, has some extremely good advice and observations. For example, “I decided that if I had to act a fool to get a fellow’s attention, then I didn’t want it.” I also loved, “I always despised those arrogant kids who set themselves up as authorities when God gave them perfectly good ones in parents.”

For those who love mysteries, this is a good one. You will be kept guessing at the identity of the thief until nearly the end of the story. I appreciated the Christian values portrayed in it, although there wasn’t nearly as much about Alexa’s and Joe’s faith in this story as in some others by Chautona Havig. I’m still not convinced that I want to read very many murder mysteries, but I don’t mind reading hers.

I received a free copy of this book from the author in exchange for an honest review.

WARNING: A couple of the characters say a mildly bad word when under great stress. 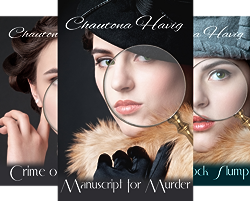 I also wrote a review of the entire series, for those who are interested:

Murder mysteries? Not my cup of tea—usually. I prefer books that have sage advice woven throughout, books that make me really think about things. The Hartfield Mysteries, however, do that.

Alexa Hartfield is an author living in the small town of Fairbury, near Rockland. Her specialty is murder mysteries. She lives alone and likes her life that way. To most people, she appears eccentric; most of her clothing appears to be from other eras, from medieval times to the 1980s. Her comfortable life is suddenly shaken up when, in the first book, Manuscript for Murder, people start dying. The strange thing is that they are being killed in exactly the way she’s writing about in her current book! What is going on? Joe, the policeman who comes to her rescue a few times, ends up a frequent visitor, but she is certainly not interested in romance—and neither is he.

Crime of Fashion involves a new business which Alexa becomes involved in—but odd things happen there, too, and tragedy strikes close to home for her. After that is all resolved, she goes to California for her biannual visit to her parents (in the author’s hometown!) in Two O’clock Slump. She anticipates the usual stressful visit, with her extremely religious parents trying to get her to repent of something that happened when she was a teenager, but then a man is found dead in the next motel room to hers, which was supposedly empty. During the investigation, she must flee. I had a hard time with this book; you don’t find out until one of the last two or three chapters who the villain is, and it’s very hard to put the book down at that point.

Front Window picks up soon after Two O’clock Slump ends; one of the main characters is Alexa’s Aunt Faye. We met her in the last book, but she really shines in this one. She has moved from California to Fairbury in the interval between the two books, into a retirement apartment. While Alexa is away from home, Aunt Faye finds the perfect excuse to annoy her greatly—someone is stealing things from the residents! The police are convinced that the thief is someone who lives in the complex, but Aunt Faye doesn’t believe that. Can she find a way to prove her point?

If you want a clean Christian mystery series, check out the Hartfield Mysteries. Just be careful when you get engrossed in them, or you may find meals being put on the table late—and you may well find yourself annoying the people around you as you hoot with laughter at some of the situations described. I hear that my children heard me laughing hard a couple of times in one day as I read Front Window! Mystery and humor aside, I really enjoyed watching Alexa grow and change in her relationships with other people, especially Joe, and the community in general. The only thing I did not appreciate about the books was the character who married a divorced woman; I take Matthew 5:32 literally.

WARNING: There is at least one murder in each book, not graphically described but there all the same. In Front Window, the police chief is mentioned as swearing a time or two.

The book titles are Esther’s affiliate links. By clicking on them to buy the books from Amazon, you’ll help support her website, with no extra cost to you.