The first town we stopped in on our West Coast trip was Westport. Westport is a historical coal-mining town, and there is still a lot of coal shipped out of there! It is interesting to look at the cuts along the road; most of them have a coal seam in them. We learned a lot about coal mining. And, an interesting side note—the motel/campground where we spent the night heats their water with coal! My second boy saw the owner, in the morning, loading coal into a large hopper in a building next to the kitchen/toilet block. He asked if the man buys coal by the truckload. No; he digs it out of his own private mine by the truckload!

The first place we went sight-seeing in Westport was an accidental find. We were trying to get out of town to the north to go to the Denniston Incline, and ended up at Tip End, which turned out to be a breakwall we could drive out on, way out to the end of the Buller River. There is a breakwall on each side of the river mouth, forming a harbor for shipping coal. We enjoyed watching the enormous waves roll past and break on the bar at the river mouth. The end of the breakwall doubles as a memorial to sailors lost at sea, from Westport, and some drowned right there at the sandbar This is our sixth, fourth, and second boys. After spending a little while enjoying the waves out there, we finally did find our way out of town to the Denniston Incline. For about 88 years, until it closed down in 1967, the Denniston Incline was used to transport coal from mines on top of a very high plateau down to sea level, to be shipped to Westport by train and then on ships. It was only one of at least a half dozen inclines, all of which seem to have operated similarly. This one is in the process of being restored. The basic idea was that coal was transported to the edge of the plateau, either in huge “buckets” on aerial tracks or, later, by truck, then put into Q wagons, which are train cars. These Q wagons were run down a very steep track, by gravity, falling 510 meters in 1.7 kilometers! There were two sections of the track, with a brake at the top of each. Once at the bottom, the Q wagons were unhooked, then hooked up to a train for the trip to Westport. Each full wagon, as it went down, pulled an empty one back up to the top. That must have taken some coordination; a lot of places, there was only room for a single track! They obviously had it timed so that the full and empty wagons passed in the places where there was room for two tracks. We really enjoyed walking around the site, although it would have been much better if the weather was better. It was raining and sleeting and cold during this visit! That is not uncommon weather there, though. A view on the way up to the top. The road is not for the faint of heart! Very steep, and a lot of winding back and forth. I noticed a sign at the bottom warning that this road is used seven days a week by mining trucks. The top of the incline, and looking down it. Not too good a picture, but remember what I said about the weather?! After the incline was shut down, the buildings burned, and these ruins are what is left. The tracks in the upper center lead to the top of the incline; you can see it start to go down. 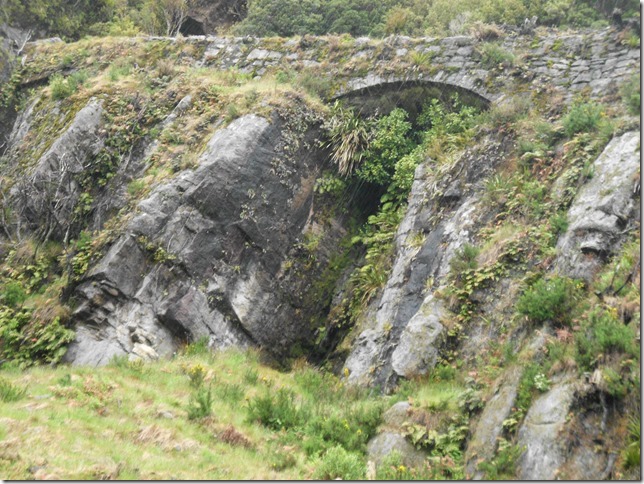 Gayle and the boys did more exploring than we females. I’m not sure what this was; my fourth son has his own camera and he took this picture. Edited to add: I have now been told that this was a track that led up to the mouth of a mine. It had rails on it that trolleys of coal were pushed along to take them to the top of the incline, and there are apparently even trolleys left there!

The next day, the weather was great—and we toured the Coaltown Museum in Westport! We should have done that the first day, and gone up to Denniston the second day. Ah, hindsight. It was quite interesting to see the exhibits, though, after having toured Denniston already. This is what we saw from where we parked to visit the museum! Not sure who took this picture, but I thought it was cute. Daddy carried the youngest from the van to the museum. A few pictures from the museum: Top is a Q wagon at the actual slope at the steepest part of the incline. Third is the brake drum used to stop the wagons, and bottom is our youngest in front of one of the small wagons they used to pull coal out of the mines.

All in all, it was a very educational time we spent in Westport! The museum is very well done, and economical for even a large family. We would love to spend more time at the Denniston Incline, and I look forward to seeing further restoration there. A lot has been done since we were there four and a half years ago.

← Off on a Holiday!
Tauranga Bay and Gold Mine →