Have you ever thought it would be interesting to learn some Latin? We really haven’t done much of anything towards learning a second language; we dabbled a bit in Spanish and German, but with two boys who struggled majorly with just English, other languages haven’t been a priority. However, when Roman Roads Media asked for reviewers for their Picta Dicta online courses, Mr. Intellectual expressed interest in it. We were given a subscription to Picta Dicta Natural World, and I have been using it a little myself, too. When I set up an account, when we were first given access to Picta Dicta, I added myself as a student as well as being the administrator, and then signed up Mr. Intellectual with our other license. As part of creating the accounts, we had to choose which level to use. There are six levels to choose from: Basic, English, Reader I, Reader II, Express, and Teacher. Basic and English both focus on English words, and everything is read to the child. Reader I and Reader II introduce the Latin words for the same words that are introduced in the first two; I’m not sure what the difference is between them. Teacher appears to only have the introductory pictures for each word, without any activities. It is very easy to switch from one level to another by simply logging in to the administrator account and editing the student’s settings.

Both Mr. Intellectual and I chose to use the Express level. It teaches everything that is in the other levels, but faster. Words are introduced, with a story about each word to help you remember it. 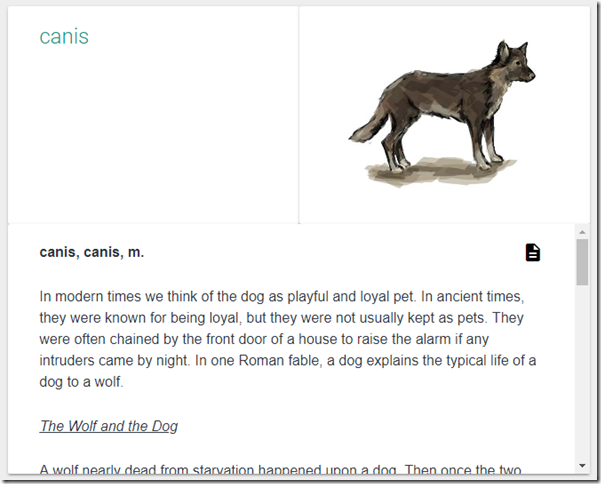 After you have been introduced to about six words,

you are given one of the words.

On the next screen there are pictures and a phrase about six words, some that you have learned and a few others that you will learn soon, and you have to choose the correct one.

After going through all of them, you are introduced to a few more words, until you have learned all the words for that topic. For example, in the first topic, Basic Animals, you learn the Latin words for cow, horse, donkey, goat, sheep, cat, dog, lamb, kid, boar, stag, bull, bear, and wolf. You get to match the spoken/written word to the picture, then the picture to the written word, and finally, learn to spell the words. If you make a mistake, you are given more chances with the same word until you get it right. The program is totally self-paced.

So what do we think about this program? I find it fun! Quite often, when I’m working on it, one or another of the littler ones (ages 8, 6, and 3) come along and help me out. They occasionally get something right that I was going to get wrong! It’s a game, where you try to match the right words and pictures. The spelling parts are more difficult, but otherwise it’s pretty easy. There is a small incentive built in, as you can see from my account, here. You get stars for completed lessons, based on how many questions you answered correctly. A perfect score earns you five stars—looks like I should redo a few! 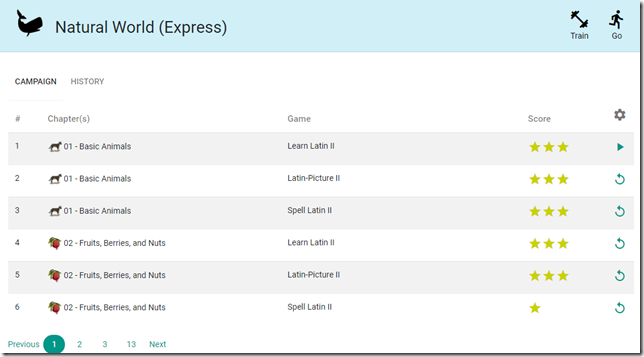 It’s good to have at least a little grasp of Latin, as so many English words come from languages that came from Latin. Mr. Intellectual mentioned the other day after he worked on Picta Dicta that he had learned the Latin word for head, which was caput. He figured out that must be where capital comes from, as in the head city of a region. He was pretty excited about that. So, if you are needing to know Latin, or have someone who enjoys words, this program would be a great introduction. By going through it, you will not only learn many words having to do with animals, but also fruits and vegetables, anatomy, land forms and terrain, parts of trees and plants, water…and that’s just the first few topics! Over 400 nouns are taught in this program. I appreciate learning how to properly pronounce these words; when you read a lot but don’t hear words, it’s hard to know how to say them. Oh, one more thing I noticed: A number of words were very similar to the Spanish words for the same animal. Learning Latin might be a good base for going on with another of the Romance languages, such as French, Spanish or Italian.

Please click on the image below if you want to learn more about this course; some of the other reviewers have given a lot more detail!