My 5-year-old has been asking for school, and begging me to teach him to read. I’ve given him the attention I could, but I wasn’t sure he was really ready to learn to read, so I haven’t been pushing him at all. When the opportunity arose to review K5 Learning, I showed it to him and asked him if he wanted to try it. He was excited to do this online program, and couldn’t wait till I got the information about logging in to do it. He faithfully does his “school on the computer” every day, and wants to do the worksheets, too.

There are three parts to the K5 Learning. Mr. Imagination has only been using the Reading and Math; he’s too young for the Spelling. He is doing very well with the Math part. I usually just let him do it by himself, because I’m busy helping the older boys with their schoolwork when he does it in the morning, but a couple of afternoons when I’ve been working in the kitchen he has wanted to do his school, so I’ve gotten to observe. I couldn’t believe what he was able to do! He was supposed to put numbers in order the one time, and they gave him 90, 91, 92, 93, 94, and 95. He did it correctly without hesitation. He was also supposed to use the greater than and less than symbols (> and <) that day. He had a little more trouble with that, but caught on pretty quickly. Yesterday he was working on addition on it, and when he finished he came running into the kitchen saying, “Two plus two is four!” I quizzed him on a few other simple facts and he figured them out pretty fast, too. 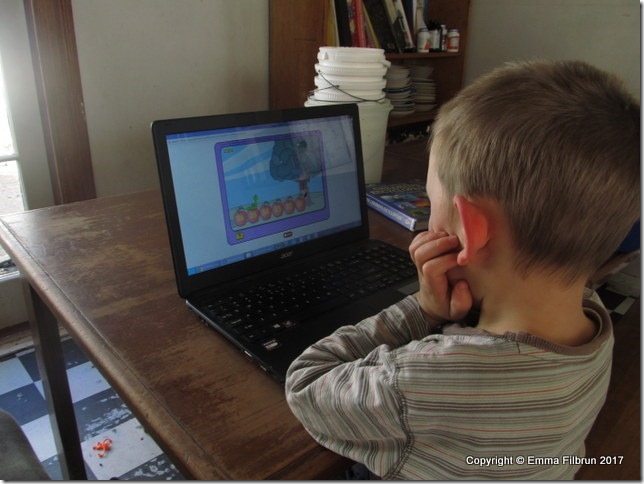 On the other hand, he’s having more trouble with the Reading section. I can’t tell that he’s really learned much there although he picked up rhyming words very fast from working with them on there. I’m guessing he is dyslexic and that reading will be a little harder for him. It does seem like K5 Learning does not start at the very beginning; my impression is that even Kindergarten starts with some prior experience presupposed. They do say they are a supplementary course, rather than a complete curriculum. My impression is that they spend more time working on sight words than phonics.

There are worksheets to go with each lesson. You can actually use the worksheets without having an account. Mr. Imagination loves doing them, and has done very well. On the sign-in page, worksheets are suggested based on the lessons the child has been doing recently. (It looks, though like he didn’t understand what he was supposed to be doing on the one page here!) 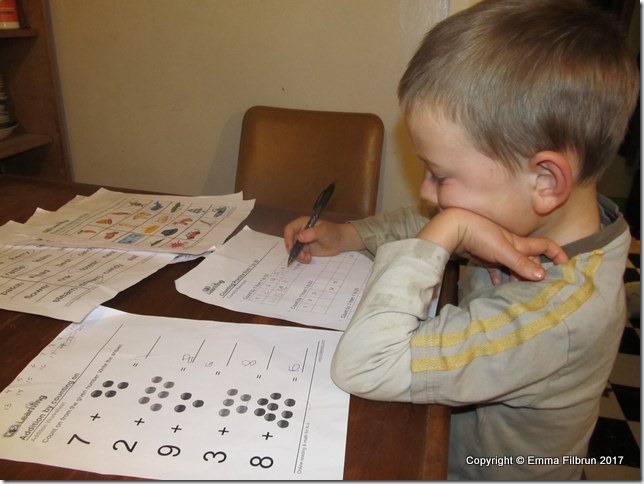 In my opinion, if you have a child who wants to play games on the computer, and you want them to be doing something educational, K5 Learning would be a good choice. As a replacement for other schoolwork, I don’t think it’s a very good choice. One thing that would make it a lot better would be the ability to choose the lessons you want your child to do, and to be able to start them where you want them. As it is, if you want them to be working at a different level from where the program puts them, you have to contact the website. I did do that when Mr. Imagination started out, because the math he was being given was too advanced for him. I asked them to reset him at the beginning of Kindergarten (he had tested between Low Kindergarten and Low 1st grade for reading, and Intermediate Kindergarten to Low 1st on their assessment), but when he got on again the next time he was still at the same place he had been before.

Mr. Sweetie has also used K5 Learning a few times. He mainly does in the evening after his chores are done, when he feels like playing on the computer. He has mostly done the reading part. He’s been given exercises like finding the main idea of a paragraph, or figuring out the meaning of words. They spent a lot of time having him do reading comprehension exercises. I did enjoy the opportunity to have him do the assessment and get a bit of an idea where he is academically. He tested from just below to well above grade level in the various areas they tested. Nice to know he’s average!

Since I don’t have anyone doing the spelling part, I took a look at it myself. There were two areas to choose from, Vocabulary Tutor and Spelling Tutor. In Vocabulary Tutor, you are given a definition and a sample sentence, and must determine what the word is. They do give you dashes to show how many letters are in the word. The Spelling Tutor is similar, except that they pronounce the word for you. In both cases, you have to spell the word correctly before moving on. They seem to be coordinated; for example, I misspelled a word on the Vocabulary part, and that was the first word when I switched to the spelling part.

My final opinion: There are pros and cons to K5 Learning. I like that it is self-directed; I don’t have to help my boys with it much at all. When they want to play something on the computer, they have an educational activity to do. I don’t like that it is sight-word based rather than phonetic. Also, you must keep in mind that it is not a complete curriculum, but supplementary. The part I don’t like about using as a supplement is that you can’t choose the lessons you want them to do. If you’re interested in seeing if this program is a good fit for your family, they offer a 14-day free trial. Up to four students are allowed per account.

← Little Miss in May
Product Review—MarshMedia →