I’ve been thinking about my dad a lot lately. He died of cancer 16 years ago, just before Christmas. While he wasn’t perfect, as none of us are, I feel very blessed to have had him for a father—and am very sad that my children haven’t had the opportunity to know him. I thought I’d share just a few of my memories of him here. This picture is of one of Dad’s favorite flowers, which he called a “pink”. (His other favorite flower was the black-eyed Susan.) When we stopped on our way home from church two weeks ago to pick cherries, there was a patch of these tiny pink flowers beside the van when I got out, and it made me think of Dad. 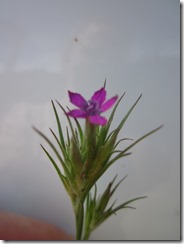 One thing I really remember about growing up is the sheer number of people who passed through our home. I’ve been reading my diaries from my teenage years lately, and one year I circled, on a pocket-size calendar, every day that we either went somewhere or someone came to see us. Some months had every day circled, and all had nearly every day circled!  A story I remember clearly illustrates the kind of life we led.

Our manure spreader had broken down one fall, and Dad really needed another one, quickly, but as always there was very little money available. He and Mom went up to their bedroom to pray about the problem. As they were praying, a semi pulled up at the side of the road by our driveway and the driver walked up to the house. It turned out that he was a friend of one of our friends and wanted to meet Dad. In the course of the conversation, our need of a manure spreader was mentioned, and he said he knew of one that was for sale. Within a day or two, we had exactly what we needed!

I also remember Dad’s five-minute vacations. Pardon the mention of more manure, but when you have cows you have to deal with the stuff. He cleaned the gutters by hand every day during the winter, scooping the waste from 18 cows into a wheelbarrow, then taking it out the back door of the barn and dumping it off the edge of the hill into a pit. In the spring he would spread it on the fields. I remember him standing out there on the edge, just taking time to admire the sun setting in the west. That was his vacation for the day.

Dad was raised in the city, and moved to the country when he was 25. He claimed that he retired at that age and never worked another day in his life! Of course, he worked harder physically than he had ever worked before, but it goes to show what a difference attitude makes.

One thing I inherited from Dad is my love of history. I used to love discussing history with him.

What stands out the most from Dad’s life was his love of God. That love radiated out of him to others. We often marveled at how complete strangers would end up telling Dad their life stories within a few minutes of meeting him. He was a good listener and had a way of asking penetrating (and sometimes uncomfortable!) questions.

Dad was a slow reader, but what he read he remembered. He did a lot of writing, mostly articles for the church paper. He would write them by hand, and then Mom would type them for him. One of my treasured possessions is a collection of his writings that she typed and copied for each of us children.

Dad was more than head over heels in love with Mom. He had his own terms of endearment for her. She was the “Beauty Spot of West Michigan,” the “Mother of Multitudes” (there were eight of us), and “Pretty as a Peach Pit.” One morning on our way to church, he suddenly remembered he hadn’t had his morning kiss, so he pulled over on the side of the road for a kiss. I could still show you the spot!

We never had new vehicles. One station wagon was rusty enough that he would hand a piece to a visitor, casually offering him a souvenir of his visit! A truck had a handy apple-core disposal hole beside the driver’s seat. These vehicles got us around most of the time, though. A joke in our house was that if he saw someone stealing our truck he’d run over and tell the person he was welcome to it–but give a long list of things you had to know in order to make it work!